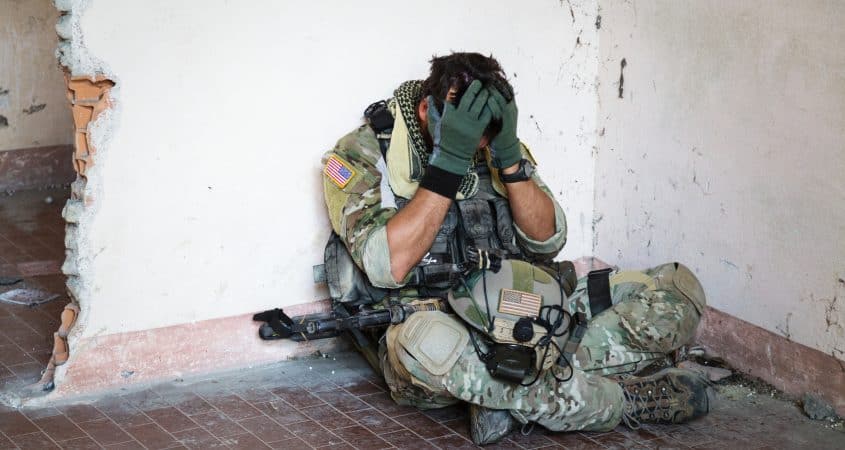 According to recent reports, Cannabis can reduce the symptoms of PTSD by 75%. (01)

In fact, some researchers believe that PTSD may actually be caused by an imbalance in the endocannabinoid system.
Patients suffering from PTSD were found to have low or depleted natural levels of Endocannabinoids. (02)

Endocannabinoids are synthesized in your body from fats found in foods like eggs, organ meats, sunflower seeds, and Hemp Seeds. (03)
Because most of us are eating a low-fat, low-cholesterol and junk food diet, these important foods are missing from our meals. (04)

Stress, and especially chronic stress, has been shown to reduce the number of Endocannabinoid (CB1) receptors in every brain region studied so far. (05)
Combine our modern dietary deficiencies with trauma-induced chronic stress, and you have persistent and seemingly untreatable PTSD. In fact, additional research has established that clinical depression is also an endocannabinoid deficiency disease. So our modern diet and lifestyle is only making matters worse. (06)

That’s why Cannabis – the entire plant – is causing so much excitement in the treatment of severe PTSD.
Immediate relief from symptoms like panic attacks or acute stress can be relieved within 5 to 15 minutes of inhaling vaporized cannabis, and the beneficial effects can last for several hours.

Meanwhile, long term relief from, and even elimination of symptoms can be achieved by regularly consuming products like hemp seeds or hemp oil – giving your body all the building blocks necessary to produce your very own endocannabinoids!