Together, We Can Change The World

You are here: Home1 / Journalism2 / News3 / Together, We Can Change The World

Watching the news and looking “behind the scenes” of this world is enough to make any intelligent person want to just give up. The situation seems hopeless, so why not just enjoy it while we can? I’ve thought about this many times, and I’m sure I’m not alone.

We live in a global society that celebrates itself while polluting the environment and enslaving half of all humans in poverty. 1 We have simultaneous obesity and starvation epidemics. In fact, at least 80% of humanity lives on less than $10 a day1 and yet we are using up the resources of our planet faster than they can renew and repair the damage we inflict. 2

But I don’t want to talk about all that is wrong with the world, I want to talk about how each and every one of us can help make a better world – right now, and for future generations. We don’t need sacrifice, and your life doesn’t even need to be impacted, but we all need to act.

There is a Solution

What I’m about to say will seem like utter “BS” – I know because I thought so myself. I encourage you to read through and examine the evidence I will present. Once upon a time I thought most of these claims were bogus, and I decided to “debunk” them. Yet the more I researched these claims, the more convinced I was that they were true. Now, my wife and I have quit our jobs and we work to research these topics full time!

You may have read one or two articles on this site and realized the medical potential of the Cannabis plant. Let me tell you: You ain’t seen nothing yet!

The Cannabis plant grows outdoors nearly anywhere on earth apart from the poles. 3 It is extremely fast growing, from seed to maturity in around 3 months. 4 In that short time, this crop provides an amazing source of food (hemp seeds contain 2.9 times the protein of beef 5, and 3.6 times the Omega-3 in Salmon 6), an amazing source of clothing (canvas was named after cannabis 7 – the second strongest natural fiber 8 which excels in fiber length, strength, durability, absorbency, anti-mildew and antimicrobial properties 9), an amazing source for building material (Hempcrete is a non-toxic, mold resistant, fire resistant, pest repellant, temperature and humidity regulating, Carbon NEGATIVE building material 10), and an amazing source of future technology and energy (hemp supercapacitors outperform standard supercapacitors by 200% while costing a fraction to produce 11). All of this in a crop that sequesters 10 tons of CO2 per hectare 12, requires less than half the water of Cotton (while producing twice as much fiber per acre)13, can be grown without pesticides or herbicides, and actually release precious monoterpenes into the atmosphere.14, 15

These are bold claims that are hard to believe – I know because I didn’t believe them at first myself. How can one plant be so versatile, so hardy, so fast growing, and yet illegal? If any other plant had even one or two of these attributes, it would not be outlawed but encouraged. In fact, in 1619 the Virginia Assembly passed legislation requiring every farmer to grow hemp! 16 So there must be good reasons for our current governments to outlaw this plant, right?

If I can convince you that these claims are true and that the cannabis plant poses no danger, then I urge you to get active and contact your local government representative to push for full legalization. We don’t want this plant to be the sole property of pharmaceutical and multinational corporations, we want it to be accessible to every farmer on every continent, and even available for individuals and families to grow at home in their own garden (or their closet).

So let us examine each of these claims in more detail, and allow me to present evidence to support the complete decriminalization and legalization of the Cannabis plant.

Wait a minute, isn’t Cannabis just another word for marijuana – a dangerous drug? Well, yes and no.

Actually, the word marijuana didn’t exist in any English dictionaries until after the 1937 Marihuana Tax Act. 17, 18 It was originally a Mexican-slang word referring to “mejorana chino” (Chinese marjoram) since it was a herb often bought from Chinese dealers by Mexican immigrants.19  However, that word would be used to outlaw the entire Cannabis plant.

Alcohol prohibition was a very good business in the US for those who enforced it, especially Harry J Anslinger – the first Commissioner of the Federal Bureau of Narcotics in 1930. On December 5th, 1933 the prohibition of alcohol was ended. Now the Federal Bureau of Narcotics needed a new prohibition to justify its existence. Anslinger had made a name for himself in the 1920’s by traveling the world and helping to battle the international drug trade, so it seemed only natural to turn his attention to this “Chinese herb” that was most often smoked by Mexican immigrants.

It wouldn’t be easy to outlaw a crop as beneficial as Cannabis, and so the laws were very carefully crafted using the little-known slang word “marihuana” (also marijuana) instead of the well-known words Cannabis or Hemp.

Cannabis has already helped to change the course of human history on numerous occasions and has been used by humans since before recorded history. Hemp seeds, rope, and cloth have been found in the oldest tombs. Medical uses for Cannabis are documented in humanity’s earliest medical texts.

When Gutenberg’s presses began printing, it was Hemp paper that received the ink. Bibles, literature, philosophy, and science all spread through Europe on Hemp paper.

When explorers set sail for the New World, it was Hemp sails held by Hemp ropes that carried them. In fact, the word canvas is derived from the word Cannabis.

This New World even drafted their Declaration of Independence and the United States Constitution on Hemp paper (the final drafts were written on parchment). The 1619 law requiring Virginian farmers to grow Cannabis was not an outlier, as many of the first US Presidents had nothing but praise for the plant: 20

“Make the most you can of the Indian Hemp seed and sow it everywhere.”

“We shall, by and by, want a world of hemp more for our own consumption.”

“Hemp is of first necessity to the wealth and protection of the country.”

When those brave pioneers ventured west, they once again used Hemp canvas to cover their wagons and Hemp rope to reign in their animals.

When the Gold Rush hit, young Levi Strauss recycled those Hemp canvas sails and wagon covers into durable pants for prospectors. He dyed them a deep blue to help cover stains, and inadvertently created the “all-American” blue jeans!21

The Transatlantic Telegraph Cable of 1858 carried the first electronic communications from Europe to the United States. It was reinforced and wrapped in Hemp fibers, as was the more successful and durable Transatlantic Cable of 1866.22

Up until the Civil War, Hemp was a major industrial crop in the United States. We tend to think of slaves working on cotton farms, however, Hemp is extremely labor intensive to harvest and process. With the end of slavery in the US, cotton began to expand as a major industrial fiber crop. The invention of the Cotton Gin in 1793 saw cotton skyrocket as an industrial crop. Hemp fibers are as much as 8 times stronger than cotton fibers, Hemp produces 2-3 times more fiber per acre, uses less than half the water per acre, and requires no pesticides or herbicides (whereas cotton farming accounts for nearly 50% of all agricultural pesticide use worldwide). 23 Unfortunately, without slave labor to process the crop, Hemp was prohibitively expensive. 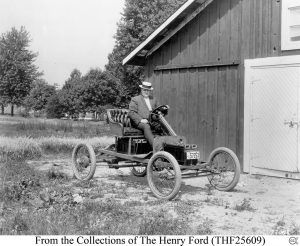 “Ford Electric Car No. 2” was completed on June 10, 1914. It’s top speed was 17 mph and its longest run over average roads and grades was 59.1 miles. For further details regarding Ford’s electric car endeavors, read the book “Taking Charge, The Electric Automobile in America” by Michael Brian Schiffer.

Henry Ford often worried about the sustainability of mass-marketed automobiles. He worked extensively with pioneers like Rudolf Diesel to produce fuels from farmers’ surplus crops. They found hemp seed could only produce about 50 gallons of fuel per acre, however, it produced around 75% less soot and less Carbon monoxide. 24

If they had kept going, they would have discovered that Hemp stalks can be processed to produce methanol, and this process can produce between 500-1,000 gallons of fuel per acre! 25 This fact alone makes Hemp a valuable crop for farmers, as they can produce their own fuel even if they didn’t want to sell fuel on the open market.

Paper from trees didn’t make much sense, and until the mid-1800’s all paper came from cloth or annual crops like papyrus or cannabis. However, in 1850

In 1936 a film called “Tell Your Children” was created by a church group who intended to frighten parents and children with the supposed dangers of the “Demon Weed”.