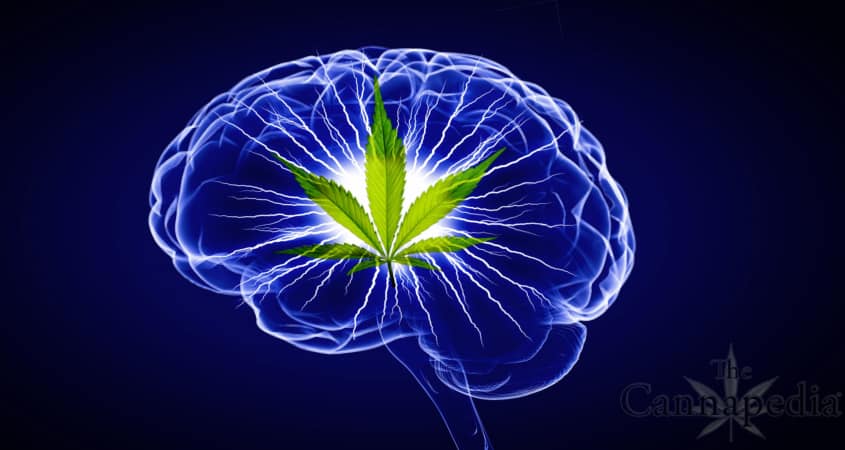 Inside your body are millions of cannabinoid receptors. They have one purpose: to receive and process neurotransmitters known as cannabinoids – substances your body naturally produces (called endocannabinoids), and named for the fact that they are found in the cannabis plant, or marijuana.1, 2

In fact, cannabinoid receptor type 1 (referred to simply as CB1) is one of the most abundant receptors in the human brain (specifically, G-protein coupled receptors).3

CB1 receptors operate in a way that scientists used to believe was impossible: retrograde signaling. That means cannabinoids are the only known brain signals that travel BACKWARDS across the synapse to regulate the signaling neuron.4

Typically, neurotransmitters flow in one direction: from the signaling neuron to the receptor neuron. Messages can travel in both directions during the growth and development of the nervous system, but adult neurons can only fire in one direction. Recently scientists have discovered that cannabinoids actually travel the opposite way – called retrograde signaling.4

When a receptor neuron is being over-stimulated, it can actually send a message backward – to the signaling neuron, telling it to calm down, and stop signaling so much. The only neurotransmitters that have been found to do this in adult neurons are cannabinoids.4

Why Is There No Lethal Dose For Cannabis?

Cannabis appears to work completely differently in our brains and neurons than any other known substance.

Imagine you have two people talking: a speaker and a listener. Now let’s simulate a drug like morphine on this conversation. Unknown to the speaker, someone has put ear plugs in the ears of the listener. The speaker keeps talking, but the listener doesn’t hear a word.5

Instead, let’s simulate cannabis on this conversation: Rather than blocking the listener from hearing, we go directly to the speaker and tell them to stop speaking for a bit.6, 7

Now there is no miscommunication, and there is no wasted effort. The speaker simply knows that the listener doesn’t want to listen right now, and so stops trying. This is why cannabis is so effective in treating pain and inflammation. It doesn’t block the pain signal from being “heard”, but rather it can tell pain neurons to quiet down and stop passing on their message.6

The endocannabinoid system allows receiving neurons to regulate their own incoming signals. Unlike conventional neurotransmitters, cannabinoids are neither excitatory (causing more stimulation) nor inhibitory (causing less stimulation) – yet at the same time, they are both, since they modulate the incoming signal.8 Cannabinoids simply regulate (turn on or off) other neurotransmitters, so if they act on an excitatory signal, they function as inhibitors. This means cannabinoids act as both ‘uppers’ and ‘downers’ depending on what your body needs. This is how they treat symptoms like chronic pain, post-traumatic stress, and seizures. If they act on an inhibitory signal they function as stimulants, and this is how they treat symptoms like depression or lack of hunger.

Since this is a natural process in our neurons, cannabis-based medicines are proving to be extremely effective. There is no lethal dose for any known cannabinoid. This is also due to another key feature of cannabinoids as neurotransmitters, as we will see in the next section. 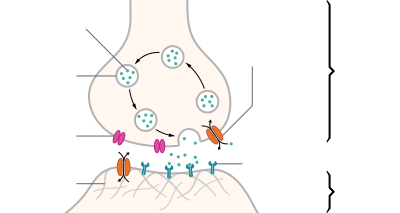 Structure of a typical chemical synapse

Conventional neurotransmitters are water-soluble, meaning they dissolve in water and have polarity (they have positive and negative poles).6

Neurotransmitters are usually stored in concentrated packets waiting to be released by the neuron. These vesicles are positioned to release their neurotransmitters very close to their receptors. As already mentioned, they travel only in one direction: from the presynaptic neuron to the postsynaptic neuron.9

When a neuron fires, it sends an electrical signal down its axon to its tips (presynaptic terminals). This causes those packets of neurotransmitters to be released across the gap (synapse) to the recipient (postsynaptic neuron).9

However, cannabinoids are fat-soluble, meaning they DON’T dissolve in water, and they lack conventional polarity. They also are not pre-made or stored anywhere in your neurons.10

When needed, endocannabinoids are rapidly synthesized from components (mostly fats, or lipids) that make up the postsynaptic cell membrane. Then they are released from all over the cell and make their way back to CB1 receptors on the presynaptic neuron.11

Oil and water don’t mix, and the space around your neurons (the extracellular environment) is mostly water. This means that endocannabinoids released from one neuron don’t travel very far, and tend to travel perfectly backward across the synapse to the signaling neuron (known as retrograde signaling).12

For this reason, cannabinoids and endocannabinoids cannot diffuse or spread throughout the watery extracellular environment of your brain and nervous system. Hence the lack of toxicity with no known lethal dose.12, 13

Cannabis is an Effective Treatment

This is why cannabinoids are so effective at treating all kinds of neurological issues; from chronic pain 14, to post-traumatic stress (PTSD) 15, to phobias – cannabinoids effectively “turn down the volume” of these undesirable signals.6

In addition, your body only produces and releases endocannabinoids when neurons fire repeatedly – five or even ten times in a row.6 This means it allows you to “get the message” but it stops the message from becoming redundant. This also helps calm the kind of neuronal storms that are associated with epileptic seizures and hyperactivity.16

Yet at the same time, there are little to no side-effects because of the method of action. The signaling neuron won’t exhaust its neurotransmitters in a vain attempt to be heard, and those un-received signals won’t dissolve into the intracellular water – spreading throughout your nervous system. Remember, oil and water don’t mix. Unlike other neurotransmitters which are water soluble, cannabinoids are fat-soluble.

Cannabis is Required For Health

Experiments suggest that insufficient release of endocannabinoids is perhaps the root cause of chronic anxiety and post-traumatic stress disorder.17

Large concentrations of cannabinoid receptors have been observed in several of the brains pain centers, indicating that cannabinoids are integral to your body’s own management of pain.18

So if your diet and lifestyle, environmental factors, or genetics have left your neurons deficient in healthy fats and other components – they cannot produce enough endocannabinoids to modulate signals for pain, fear, desire, learning, cognition, and so on.

This is why cannabis, as a health supplement, is so important for optimal human health. Not only does the cannabis plant contain cannabinoids (phytocannabinoids) that exactly match our own, but the plant also contains the nutrition our bodies need to produce our own endocannabinoids.

This article has only focused on the effects of the CB1 receptors in your brain and nervous system. Yet scientists have also identified cannabinoid receptor type 2 (CB2 receptors) which exist in your immune system, reproductive system, gastrointestinal system, peripheral nervous system, and even in your brain as well.

Our next article will focus on modern research and findings on the functions and benefits of this second major discovery.

How Cannabidiol Protects You From Alzheimers Disease
Scroll to top