Journalism
You are here: Home1 / Journalism2 / Health3 / Is Raw Cannabis a Superfood? 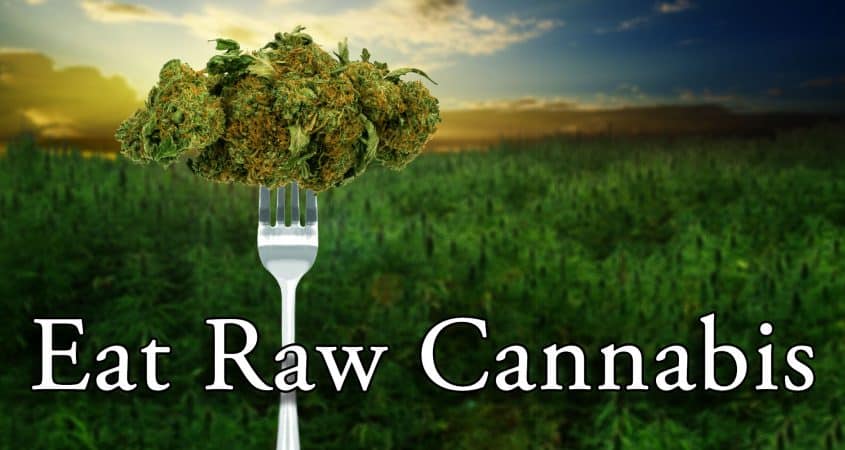 A “functional food” is a food that provides benefits in excess of nutrition.1  The number of vitamins, essential oils, complete essential amino acids, and perfectly balanced fatty acids found in raw cannabis has led experts like Dr. William Courtney to call weed a “dietary essential” and definitely a functional food.2

“When you consume “raw” cannabis, that is cannabis which has not been heated, you are consuming the cannabinoid acids. THCA and/or CBDA. Look up tetrahydrocannabinolic acid, or cannabidiolic acid. Those are the A forms of the molecules you are consuming.” 3

Dr. Raber received his Ph.D. in Chemistry from the University of Southern California,4 so he knows a thing or two about chemistry.

It is not harmful to consume decarboxylated cannabinoids, but it’s not the most natural nor the most beneficial way to consume them.

In fact, Dr. William Courtney points out that humans can consume up to 100 times more cannabinoids in their raw acid form than when they are decarbed.6
He explains that euphoria is triggered in some people after consuming 5-10mg of THC. Consuming 20mg is enough to trigger dysphoria (paranoia) in most individuals. However, no psychoactive effects are noticed in doses of THCA as high as 2,000mg.6

So what is the best way of consuming this “dietary essential”?Juicing.

“Juicing is working because it provides the cannabinoid acids, which are potent compounds that help regulate the endocannabinoid system in ways not fully understood just yet.” 3

“The cannabinoids are fat-soluble, so at this point, we are trying to encourage people to put the cannabinoids into a drink that has a lot of fat content; something that has yogurt or ice-cream, or coconut milk or hemp milk. As you increase the fat content, then the cannabinoids can dissolve into that fat, which will elevate the amount that you can have per milliliter of juice.”

So the seeds provide us with all the essential amino acids (protein), along with perfectly balanced Omega 3, 6, and 9. Meanwhile, the flowers and leaves provide us with unique cannabinoid acids along with an incredible array of terpenes (essential oils) and flavonoids that provide a wide range of dietary benefits.

How Cannabinoids Benefit Your Body

There was a time when science didn’t fully understand vitamins. When sailors spent too long at sea, they came down with an illness called Scurvy, what we now know to be vitamin C deficiency. There are some researchers who believe many modern illnesses may actually be symptoms of a cannabinoid deficiency.

As a medicine, cannabis has been shown to be effective in treating: multiple sclerosis, seizures, glaucoma, anorexia, nausea, neuropathic pain, ADD / ADHD, AIDS, Alzheimer’s, arthritis, asthma, several forms of cancer, the list goes on and on.7

CBD has been found to act as an antipsychotic, anti-anxiety, anti-depressant, anti-inflammatory, anti-oxidant, and a neuroprotectant.6

These same illnesses are treated when raw cannabis is consumed as a food.6

Unlike traditional neurotransmitters, which are pre-synthesized and stored in small “packages” called vesicles on each neuron; endocannabinoids are synthesized as needed by the lipids (fats) making up the neuronal cell wall.8
This means that consuming foods which supply the building blocks of cannabinoids is extremely beneficial for the treatment of ALL of these illnesses and their related symptoms.

There is no better source for the building blocks of cannabinoids than raw cannabis.

On the other hand, experts like Dr. Courtney say that a “phenomenal number of people” are able to slowly wean themselves off of prescription medications within a few months of starting to consume cannabis. So that money that was going towards prescription meds could instead be used to purchase raw cannabis.

Another limiting factor is access. With current laws restricting the growth and sales of cannabis, most people wouldn’t even know where to look for fresh, raw cannabis.

With medical and scientific experts calling this plant a “dietary essential”6 – isn’t it time that we changed our laws surrounding cannabis?

The best thing you and I can do to help change these archaic laws is to first educate ourselves on the benefits, and then share that information with others.

Reading this article isn’t enough. Check our references, and try to prove this information wrong. In doing so, you may inadvertently prove it to yourself in a much deeper way.

Then, once you are confident in your knowledge, try sharing some of this information with people whom you think could benefit from it. Only when enough of us are active AND well educated can we truly make a difference.

Check out this video interview with Dr. William Courtney: